Uncompromising commitment to
the principles of honesty and integrity.

Home About Us Board Of Directors 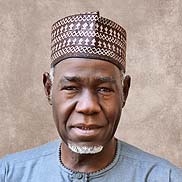 Batari Musa holds a Bachelors Degree in Economics from the Ahmadu Bello University and an MBA from the Abubakar Tafawa Balewa University, Bauchi. He also holds several postgraduate and professional certifications in the areas of Capital Market operations, Financial Instruments, Strategic Management, Anti-money Laundering and Terrorism Financing, among others.

He was a member of the Inter-departmental Committee on Money Laundering and other Financial and Economic Crimes between 2000 and 2009.

He joined the CBN in June 1993 as a Senior Manager and posted to the then International Economic Relations Department of the CBN and later moved to the Trade & Exchange Department (TED) in 1994. Having done exceptional service in TED, he was promoted to Assistant Director in 1999 and later promoted to Deputy Director in 2003. He later became the Director of the Trade and Exchange Division from 2009 to 2014.

Prior to joining the Central Bank of Nigeria, Batari worked as Zonal Manager (North East Operations) at the Nigerian Bank of Commerce and Industry between 1981 and 1993.
He was one time chairman of the Technical Committee on Comprehensive Import Supervision Scheme (CISS) as well as that of Technical Committee on Nigeria Export Supervision Scheme (NESS).